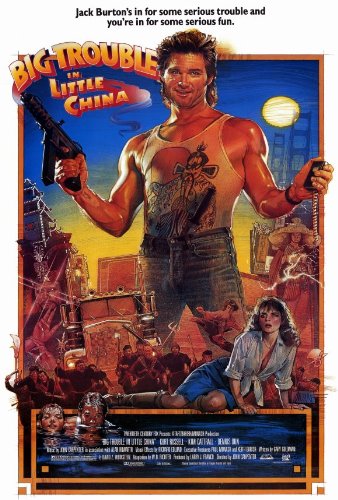 Jack Burton has all the makings of a side character. He’s showy, loud, inept, and funny. He’s the kind of character that relieves tension from moments while the real hero stays steely eyed and focused on the task at hand. But John Carpenter made him the main character of Big Trouble in Little China, and it turns an adventure film into a comedy adventure film. That combination doesn’t always work well (think of the decreasing returns of using Jack Sparrow as the main character in the Pirates of the Caribbean films), but here it works really well.

Jack Burton rides into San Francisco’s Chinatown in his big rig making a delivery. Once done, he meets up with an old friend, Wang, and they bet all night long. Wang’s fiancé is coming in from China that day and ends up kidnapped by Chinese slavers in the airport. Jack and Wang go in hot pursuit deep into the heart of Chinatown where they discover the reality of Chinese black magic in the form of David Lo Pan and his three storms, three sorcerers who command different aspects of the weather. Lo Pan needs to marry a green-eyed woman to lift a curse from a Chinese god and Wang’s fiancé is the one in a billion Chinese girl with green eyes. What follows is a breakneck race into the bowels of Lo-Pan’s fortress filled with Chinese flavored special effects.

Carpenter has always been a filmmaker who’s been more concerned with telling a fun story quickly. There are few frills in the film and the movie lightly moves along from gambling to a kidnapping to a rescue attempt in a brothel to breaking into a labyrinthine fortress of Chinese black magic. From one idea to the next, the movie jumps with energy and fun, buoyed along by a very winning cast headed up by Kurt Russel as the eponymous Jack Burton with Kim Cattrall as a young lawyer, Dennis Dun as Wang, and the fantastic James Hong as David Lo Pan.

Back to the idea of Jack as, really, a sidekick in this adventure. It becomes more and more obvious the deeper into the movie that Jack is an idiot. He talks like John Wayne and ends up shooting the roof immediately above him and knocking him out at one point. It wouldn’t have worked with an actor with less pure charisma as Kurt Russell. He makes Jack fun and eminently watchable as we kind of forget that Wang is actually the hero of the film.

It’s not perfect. I find its first act a little too convoluted (kidnapping of one girl leads to kidnapping of another girl leads to brothel leads to dual attempts to get her out leads to Lo Pan) when it could have probably been streamlined. It seems obvious that the complexity of the first act is meant to get a way in for Gracie Law (who ends up as Lo Pan’s second wife because she also has green eyes and passes a test with burning blades), but I think there were clearer ways to get that to happen.

Still, it’s a fun ride, and I can’t wait for Hollywood to remake it with a bloated 150 minute epic adventure that will in no way improve on the little 100 minute rollercoaster we already have.

A final note: Blazing Saddles is often held up as a movie that could never get made today because of its racial humor and intentional crassness. However, I find that less interesting than the more anodyne films that probably couldn’t get made today. If a studio were to release Big Trouble in Little China as it is today in theaters, I imagine the social media outcry would be pretty strong. The main character in a story about Asian-Americans is a white guy. The primary female lead is white. Hell, I imagine that the use of Chinese culture would be considered insensitive at best and evilly wrong at worst.