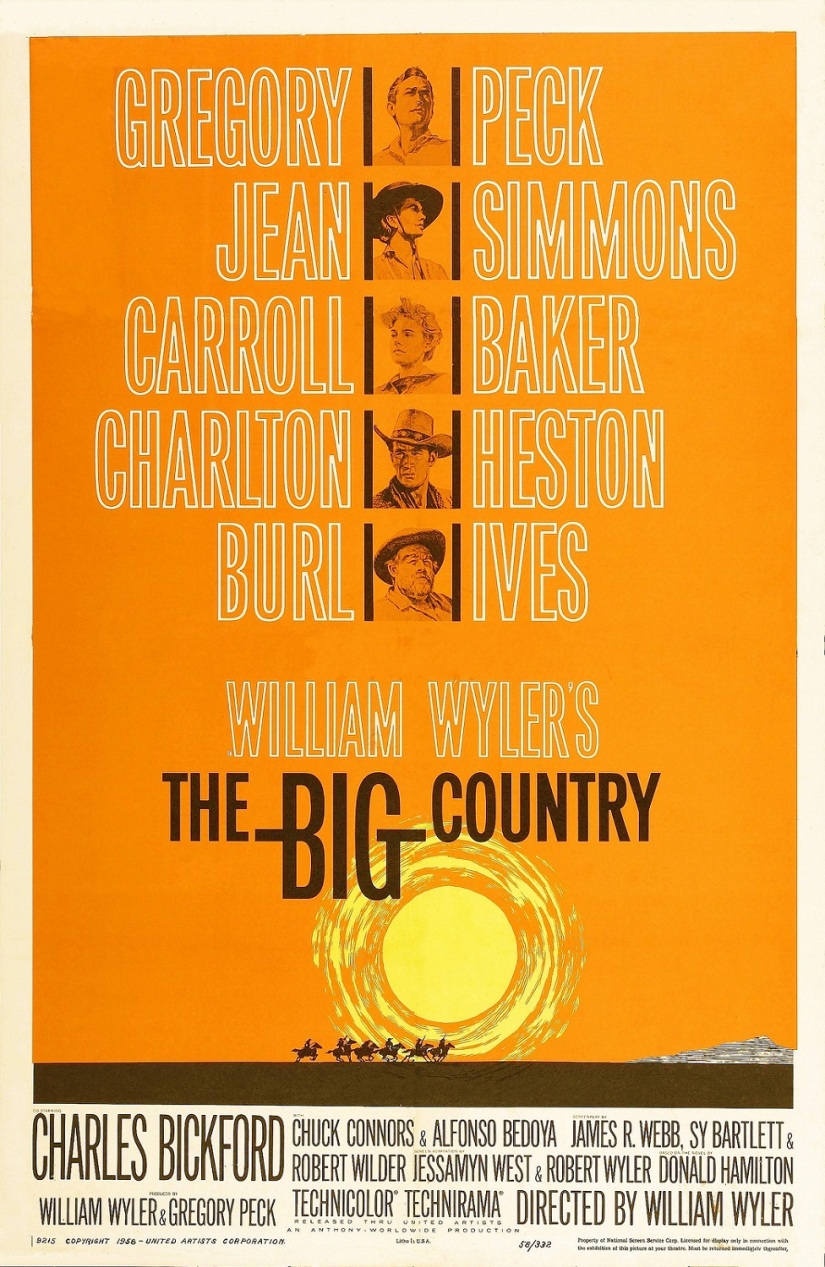 I can’t remember why I put The Big Country in my list of movies to watch, but as it started to roll I wondered how I could have ever avoided it. Gregory Peck? Charlton Heston? William Wyler? Epic western? Yeah, the cover art in Netflix was a bit of a joke (Peck standing at a fence, looking out of frame), but with a retinue like that, how could I have resisted?

Resist I did for years. I’d put it in my DVD queue and watched as it slowly went from about 400 to about 40. I knew it was available to watch through Amazon Prime, but I just never started it until last night.

I immediately regretted having put it off for so long. Wyler is such a low-key director, having made at least one of the biggest movies ever (Ben-Hur), but also having been mostly forgotten. And yet, I was constantly amazed at his skill with a lens. There were oftentimes layers of information expertly arranged within the frame in ways that felt so completely natural. There’s a party scene about halfway through the film that gets interrupted and everything falls still. As the interruption leaves the scene, we have a shot of our 5 principles, all at different distances from the camera and looking in the same direction. They’re all in focus and perfectly arranged around each other to allow the audience a view at each one, and it feels so perfectly normal.

The story overall is such a great mix of intimate and epic. There’s a land dispute between two land owners with a third in the middle. Peck comes in and tries to find a third way to keep the peace all the while juggling a dying relationship with his fiancé on one hand and a burgeoning relationship with the current owner of the land in the middle. Alongside we have a wonderful cast of characters highlighted by Charlton Heston’s who experiences a great change of heart when he finds out Peck’s true character in a fantastic nighttime fight out in the fields.

After the movie, I did what I normally do and read through the IMDB trivia page. It’s a habit I’ve developed over the years as it helps me to learn a bit more about the film I’ve just watched. Usually about half the stuff is garbage (“Actor X and Actor Y went on to also be in another movie.” That’s…uninteresting.). However, there are always gems. The one for The Big Country was that Wyler and Peck wanted the movie to be an allegory for the Cold War. I didn’t notice the supposed allegory as I watched it, and in retrospect, I feel that the allegory doesn’t work at all. Perhaps that’s why Wyler and Peck were never quite satisfied with the script. Aside from the moral relativism, the nature of the conflict in the movie bears no resemblance to the conflict of America and the USSR. The real conflict was a conflict of ideologies, but the conflict in the movie was a conflict of resources. They’re categorically different in nature, which undermines the efforts to point the story to something very specific in the real world. I’ve become dismissive of allegory in storytelling over the years, and it’s usually because they so rarely actually work. It’s more of an effort to be clever than to entertain or simply tell a story.

Still, it didn’t affect the viewing at all, and the movie itself was absolutely fantastic. It’s amazing that Wyler and Heston went on to release the gargantuan Ben-Hur just a year later.

5 thoughts on “The Big Country”