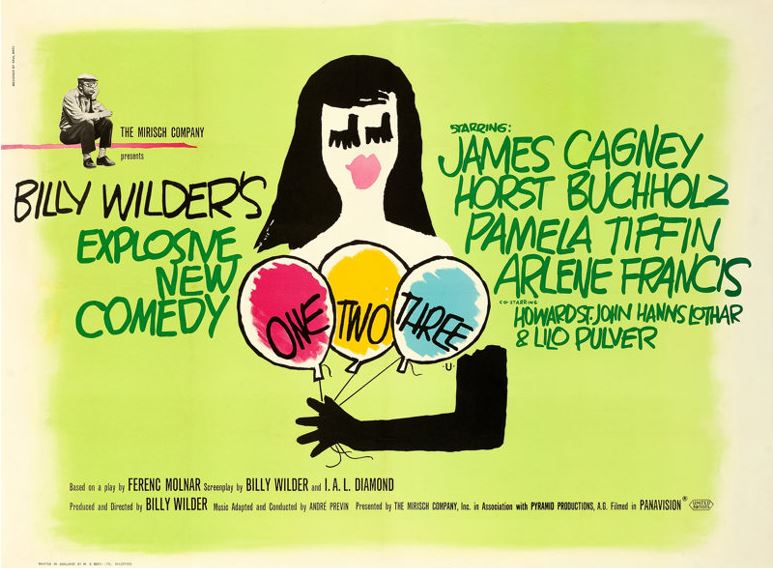 #6 in my Ranking of Billy Wilder movies.

After The Apartment, Billy Wilder returned to his native Europe and a more explicitly comic sensibility. It’s a steady build of comic tension that explodes into madcap energy by the end, and I find it absolutely riveting.

C.R. MacNamara, the head of Coca Cola’s operations in West Berlin (immediately before the construction of the Berlin Wall which started construction during filming), is trying to find his way back up the corporate ladder after a disaster in the Middle East that sent him into exile for years. He has a line on the position in charge of Coke’s operations in all of Europe, and if he can do one big thing to prove his worth, he just knows that he’ll have it. His first inclination is to use his proximity to communist controlled East Berlin to find a way to corner the soda market in all of the USSR, but corporate shoots that down. Instead, they send him Scarlett, the daughter of a top executive, to watch over after she’s gotten engaged to a man her father considers undesirable.

All goes well until Scarlett isn’t in her room one morning and MacNamara’s chauffeur doesn’t show for work. It turns out Scarlett has been going into East Berlin every night for the past six weeks, and she’s actually married a committed, card carrying communist, Otto, who carries his (paid up) party membership around and is happy to show it to anyone who may be interested. The relationship between the two is so incongruous to the point of comedy. Scarlett is pure southern belle, with her thick Georgian accent and emphasis on the material. Otto is a loud and proud communist who demands that Scarlett give up her mink coats until every woman in the world has at least one. Scarlett interprets that as she can keep one and she simply gives the other to MacNamara’s servant. The way she talks, though, it seems Scarlett is just ready to buy herself another at any time.

What follows is a complex series of actions as MacNamara tries to annul the marriage and hide it from his boss, but Scarlett is pregnant so he needs to undo what he undid and embrace Otto fully, especially since Scarlett’s mother and father are coming for a visit. The final thirty minutes of the movie is a mad dash attempt to turn the card carrying communist Otto into a deeply capitalistic German Baron of long pedigree who runs the bottling plant in West Berlin.

MacNamara simply moves too fast for Otto’s objections to stick. First it’s an objection about wearing boxer briefs, then it’s about the pants (but the objection about the briefs has been forgotten) followed by arguments over vests, jackets, and cufflinks. With every addition from MacNamara, Otto’s focus shifts from what was to what is being foisted upon him. It just builds and builds until the whole party pile into a car with a dozen hat boxes and rush off to the airport to meet with Scarlett’s parents.

The movie is filled with a cadre of fun characters. The Soviet delegation is made up of three men who lust after MacNamara’s secretary (with whom MacNamara is having an affair). MacNamara’s assistant is obviously formerly part of the Nazi regime and hides it poorly, clicking his heels at every command. When a journalist comes, digging into the potential bombshell of a Coca Cola executive’s daughter marrying a communist, one look between the assistant and the journalist humorously brings out their shared past in the SS, quickly shutting down the journalist’s line of inquiry.

It’s not deep stuff and has little to say about the Cold War, but One, Two, Three is an engaging and highly entertaining madcap comedy that turns into a freight train of humor by the end.