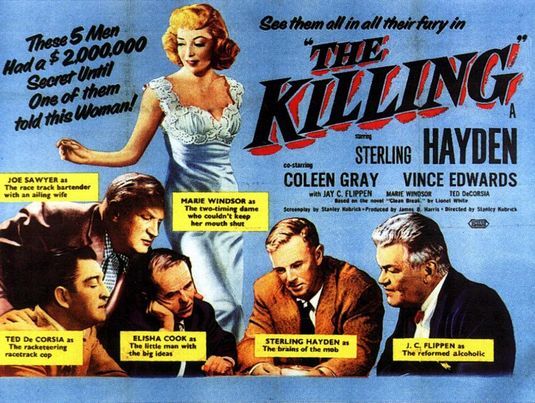 #8 in my Ranking of Stanley Kubrick films.

This Kubrick fellow just gets better and better with every movie. Fear and Desire was bad. Killer’s Kiss worked despite some technical limitations. And here we have The Killing, a well assembled noir thriller about a group of men robbing a race track.

Really, at its core, the movie is about control. It’s about one man doing everything he can to make a plan work like a clock when he has to rely on people. Some of the cogs work perfectly while others, no matter how well-oiled or selected, ultimately break under the pressure. He can only control other people to a certain degree, and, as all Hayes Code films must end with, he must get his comeuppance.

Johnny Clay has just gotten out of prison for five years after being sent up for a minor robbery. Determined to shoot for the stars next time, convinced that small jobs and large jobs carry the same ultimate risks, he organizes a robbery on one of the busiest days of a Los Angeles horse race track. He brings in one of the tellers at the track, the bartender, a crooked cop, and a financier who will all work together and split the cash evenly. With a couple of other hands to do some individual work (a brawler and a sniper), the scheme is pretty well planned, but things start going wrong before the plan ever really starts up.

The teller’s wife, who’s having an affair, learns of the specifics and spills to her lover. This is the kind of warning sign that something has been introduced that Johnny won’t be able to control, but he lets her go, believing that she is either too dim to do anything or too reliant on her husband to want to do anything against his interests. The sniper does his job at the start of the overall execution (killing the prize horse in the seventh race) but gets shot as he tries to escape. The wife’s lover catches up with most of the gang at their hideout which leads to a bloodbath of everyone involved save Johnny. And, to top it off, Johnny gets to the airport, discovers that his suitcase filled with money is too big to take with him into the airplane’s cabin, and has to part with it as he checks it with the airline. A loose dog and an errant turn on a truck leads the cash to spill out of the case and fly away in the high winds of the airport (a remarkably beautiful sight from a purely aesthetic point of view). He tried to control as much as he could, but ultimately he had to let go at certain points and it was because of those small moments that he ended up losing everything.

It’s a fascinating story selection made by a man who obviously went on to be known for extreme amounts of control over his sets and films. He spent 400 days making Eyes Wide Shut, not because he liked to just go with the flow, but because he needed to have very specific results and he did not want to allow anyone else significant control over his own creative product.

Outside of that thematic exploration, the movie very easily fits with other noirs of the time. The dialogue, adapted from a Lionel White novel by Kubrick and Jim Thompson, a pulp writer, crackles with the sort of hard edged wit you would expect from the genre. Characters speak quickly and with great little metaphors. There’s no sentimentality involved with any of them. They are there for what they want (money) and anything that gets between them and that goal is not worthy of consideration.

The central robbery, though, is the real centerpiece of the film. It’s got several different moving pieces that are very clearly presented. There’s an audience aid in the form of a voice over (that feels extraneous after a couple of viewings). From the shooting of the horse to the brawl that forms a secondary distraction to the opening of a key door to the police car idling innocently outside of a window, there’s never any question about who is whom and where anything is happening. It’s a decidedly modern thriller sequence that probably feels more at home in 2019 than it did in 1956.

The Killing represents an artist discovering the intricacies of his craft and the necessaries of narrative technique while growing significantly from one film to the next. Kubrick was presenting himself as an assured director with a firm grasp of his material.

1 thought on “The Killing”