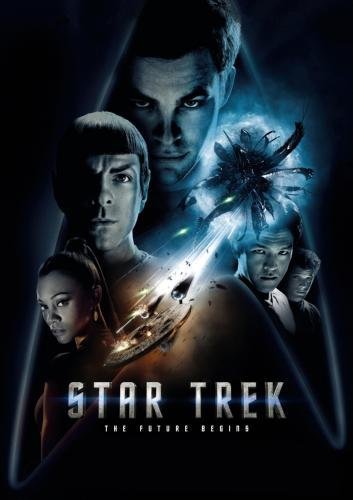 #10 in my Ranking of all Star Trek films.

There’s an interesting divide between Star Trek fans about J.J. Abrams’ reboot of the franchise. I see it as those who view the franchise as science fiction and those that view it as techno-fantasy.

In my mind, Star Trek has never been science fiction. It’s a fantasy world with switches and starships instead of wizards and dragons. They’ve made up the “science” from the beginning. Transporters? Fantasy. Warp speed? Fantasy. Phasers? Fantasy. Science has since gone to quasi-justify some of this, but none of the ideas were born of scientific rigor. Instead they were invented because Gene Roddenberry needed a cheaper way to get people to the planet surface in “The Cage” than a shuttlecraft, which they didn’t have the budget to build, so they used an optical effect to have people appear and called it the transporter.

And yet, many Trekkies disagree with me. Mike Stoklasa, of Red Letter Media, is very much on the other side and gets really irritated with the movies from The Next Generation on about how they don’t keep to the science of the show. Windows shattering in Generations led to a couple of minute long comment about how they’re not glass but transparent aluminum and have gone through so much more stress than landing on a planet. My response is to feign surprise at inconsistency in a franchise that is almost a thousand hours long.

So, when Abrams introduced red matter, seeing a planet destroyed while standing on another planet, and a super nova that will destroy the galaxy, I shrugged at the ridiculousness while others raged. No, none of it is scientific, but neither are transporters.

So, with that out of the way, let’s talk about the movie itself.

Time travel brings a mining vessel back in time right in front of the USS Kelvin and commander George Kirk. The situation quickly devolves and the Kelvin is shot to hell. Commander Kirk orchestrates the evacuation but needs to stay behind to give them a chance, forcing his wife and very newborn son to flee without him. This first ten minutes is so successful in terms of short form storytelling, I kind of wish that this was everything. It’s clear, emotional, and wonderful to look at as George Kirk sacrifices his own life to save his wife and son.

The rest of the movie isn’t as strong, but it’s still fun. Abrams has a zippy style that he ends up fitting well to his take on the material. People running around ships as they try to explain things to each other while amusing things are happening (like James Kirk’s enlarged hands). Abrams wants to entertain in a propulsive way, and he zips along fast enough that we’re just along for the rollercoaster ride.

But, getting into the details of how some of the plot works out reveals this fantasy/science fiction problem in greater detail. The one to point out (because it inexplicably comes back in Into Darkness) is the transwarp beaming concept. On a planet, Kirk finds Old Spock and Scotty. Old Spock inputs a formula from the future into Scotty’s computer that suddenly makes it able to transport people in ways that no Star Trek show has even hinted at being possible, across light years and to a ship in warp. No hardware upgrades necessary, apparently. The franchise has always existed on this border between the two genres, but, to take a political term, this movie moved the Overton Window firmly towards fantasy, and that bugs people. It also bugs me, but not enough to kill the film. It bugs me because, within this version of the universe, transwarp beaming invalidates starships completely. It was a quick solution to a plot problem without any concern for how the technology would actually work. It’s silly.

Still, the movie zips right past that and the action continues with people running down corridors.

The real strength of the film is the cast. Chris Pine is affable as Kirk. Zachary Quinto captures Spock’s essence. Karl Urban is note perfect as McCoy. Even Anton Yelchin is delightful as the seventeen year old Chekov. The movie spends so much time with our crew of the Enterprise that it ends up failing a bit with its protagonist, Nero.

Nero’s entire backstory gets told in one data dump about halfway through the movie, which Eric Bana growls through while threatening Captain Christopher Pike. It carries no emotional weight because it comes so late and is delivered so quickly and (nearly) incomprehensibly. The motivation there should have been enough to make Nero an interesting bad guy (although another motivation other than revenge might have been nice), but the delivery is kind of terrible. Our antagonist is really just a scowling guy who shows up every once in a while who hates Spock.

Still, the movie is silly with a conflict that could have been better defined on one side, but it’s still a fun two hours. The protagonists are uniformly likable and have great chemistry while the action is well staged and the movie is paced at almost breakneck speeds. It’s rather unlike any iteration of Star Trek before it. I overall prefer the ponderousness of The Motion Picture, but I can take this new tone and energy.